Fernando Pessoa
Lisbon is a surprisingly varied city, thanks to its past and the many reconstructions that helped to make a collection of different styles.
Lisbon is medieval, Baroque, Manueline, eighteenth-century, modern and futuristic, many pieces of a mosaic put together in a seemingly chaotic way and held together by a special light that illuminates and warms it all year around, giving mild temperatures even in winter. 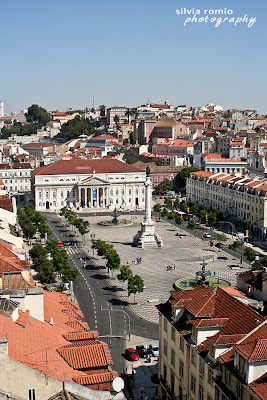 Lisbona is called “the white city” for the blinding whiteness of the facades and streets’ marbles, but white is mixed with  the blue of the azulejos , the coloured tiles that adorn palaces, churches and fountains, and are the unmistakable leit motiv of the city.
It’s hard to define Lisbon because when you start to get to know it, it suddenly changes.
A visit to Lisbon starts from the Rossio , the main square with buildings of the eighteenth and nineteenth centuries where you can wander among shoe shine boys, lottery sellers and historic cafés.
From Rossio you can gently slips to the Baixa with its right angles streets forming a perfect chessboard; here the elegant and spacious rua Augusta leads towards the other great urban square,  Praca do Comercio , surrounded by buildings painted in ochre, laid on long rows of arcades, as legs of dancers on tiptoe.
Then everything changes: soon wide streets become narrow lanes that climb along the sides of the hills on which the city lies, crammed with old houses that seem to hold on not tumble down.  The Barrio Alto can be reached by foot or by taking the historic  funicular,  an old yellow wagon squeaking along the steep climb. A few minutes run are just enough to be thrown into a different world: here the aristocratic Lisbon gives way to the medieval one populated by sailors and fishermen; narrow streets and old people sitting at the door or on the benches. In the evening the Barrio comes alive, small tavers have now become trendy  restaurants full of young people and tourists looking for relaxing atmospheres.
On the opposite side, the Alfama is the counterpart of the Barrio: here arabesque notes hidden in thefacades lead along quiet streets bordered by houses with flower-filled balconies, roof gardens and walls covered with azulejos.

In Belem Lisbon expresses its gothic soul, performing in complicated patterns that adorns the Mosteiro dos Jeronimos.
Santa Maria Church has two magnificent and highly decorated portals and in the inside there are three beautiful naves,  miraculously survived  to the earthquake of 1755.
But it is in the cloister that the gothic art performes at its very best: a perfect square, two galleries and complicated stone patters as graceful as laces that fill eyes and senses of wonder in front of such stunning beauty. 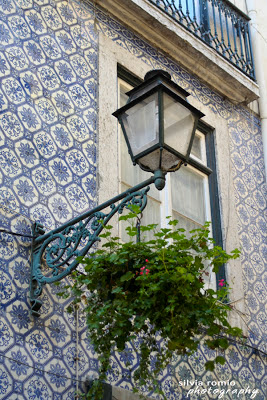 Across  the street a huge bow of stone carved with a crowd of men peering over the horizon: it’s Padrao dos Descubrimientos , the city’s tribute to the great navigators who set off from this place to the unknown, facing the sea, the infinite and their dreams.
Of those dreams today remain memories of a great past as capital of a rich and powerful colonial empire and a subtle melancholy, the suadade , which is the very essence of  fado, Lisbon’s  melody and soul, the music that pervades the city at sunset and makes it vibrate . A solo voice that starts slow and calm as background music of dinners served in the many tavernas hidden in the belly of Alfama.
But soon the voice rises and attracts attention, everyone becomes silent and listens dreamily to poignant stories in a language that manages to be universal, because it comes right to the heart.
And even if you still haven’t got to know it completely, you suddenly realize  you’ve already fallen in love with Lisbon.