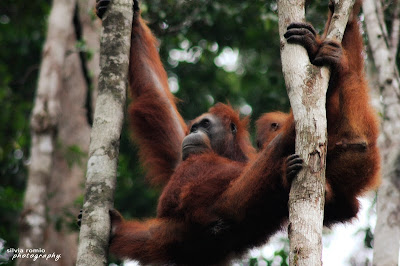 One of the greatest emotions I experienced during  # wildborneo was at Semenggoh Wildlife Rehabilitation Center, a small reserve a few miles from the center of Kuching , Sarawak , which since 1975 has been giving shelter to injured or orphaned orangutans engaging them in a  rehabilitation program that re-educates the animals to wild life. The reserve hosts over 20 specimens including many mothers with their babies.
Every day the rangers involve the youngest orangutans in special programs that teach them to survive in a natural environment : climbing trees , jumping from branch to branch and get food . It is a gradual process that lasts from two to four years, during which the animals continue to live within the reserve , till when they’re ready to return to wild life in the rainforest. 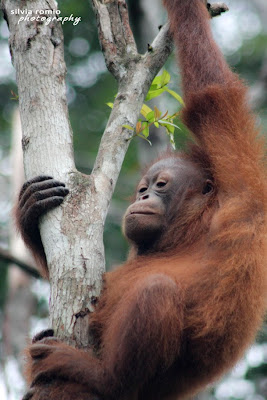 A challenging job that has proved to be have significantly contributed to the survival of the orangutan in Borneo , species in danger of extinction due to the massive and growing deforestation for palm oil plantations , which is stealing vital space to the animals. The reserve also aims to raise public awareness on the care and protection of orangutans , explaining the importance of this species, as well as all the others on the Island of Borneo, has for the future of the planet .

The reserve area is not big enough to ensure the livelihood of the entire population of the orangutans, this is why rangers put food on some platforms where the animals can freely access . During feeding times twice a day , at nine in the morning and three in the afternoon , you can visit the center and see these huge primates hover among the trees and approach the platforms to take sweet potatoes and bananas. It’s important to say that the sighting of orangutans is not guaranteed because the center is not a zoo but a reserve where animals live free and independent and can choose whether or not to come and take the food according to their needs. Given the high number of the population housed, the sighting is fairly common , but if it rains the possibility gets considerably reduced. 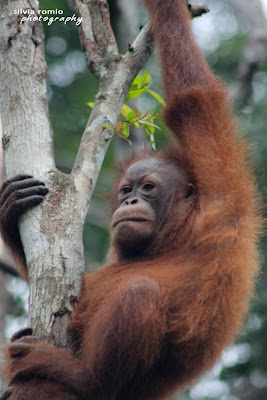 The first time I was there it was raining heavily , one of those torrential rains typical of these latitudes and I only saw an orangutan who amusingly sheltered from the rain with leaves; but perseverance has rewarded me and when I got back with the sun I had one of the most amazing travel experiences of my life!
In the silence of the surrounding forest I listened to the muffled sound of the orangutans’ jumps that seemed to twirl from tree to tree suspended between the ropes, land to take food and go up fast along the trunks , elegant and graceful ; I looked at  the mothers taking care of their babies, rocking them , handing them food or teaching them how to jump and move : they had an incredibly human look that expresses all the intelligence and sensibility of these incredible animals; I was moved by the tender gaze of a baby orangutan enjoying a banana while reaching out to his mother with the other hand , to seek physical contact .
I think part of the emotion that observing the orangutans arises is due to their extraordinary resemblance to the human race : gestures, movements and looks are very similar to ours. Watching them move freely in their natural environment becomes a journey in our distant past , a way to see and understand how we once were, and in the loving and caring gestures of the mothers we recognize that same maternal and parental instinct that we still have inside us, ancestral and incredibly intense , despite all the changes and influences that we have built around us.

Visiting Semenggoh is one of many daytrips that can be done from Kuching , capital of Sarawak . The reserve can be reached in half an hour by taxi from the city center : ask one of taxi drivers outside your hotel and agree a price: it  usually starts at 150 ringgit (approx. 35 EUR ) but you can bargain and get a better price; the rate includes two hours waiting in the center; a much cheaper alternative is bus number 6 ( 1.50 ringgit each way , less than 40 cents euro ) which leaves from the bus station in Kuching ( just outside the center ) and stops in front of the reserve’s entrance, but then you have to walk approx. 1.5 km partially uphill to the center: this walk is not to be underestimated either if the sun is shining and the temperature is hot, as well as wet , and if it rains. 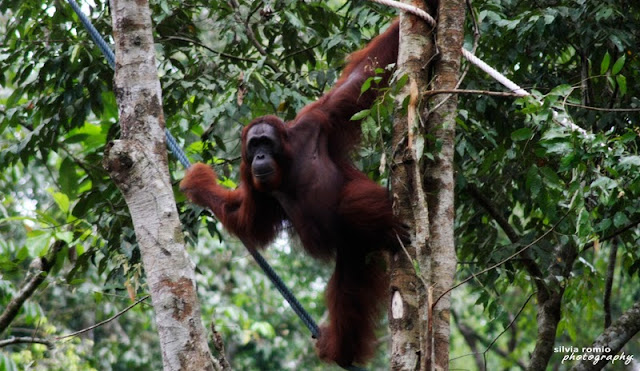 In Kuching there are several hotels of different categories, but since prices are very affordable I advice a medium-high class hotel to have modern, spacious and comfortable rooms . I chose Hotel Pullman Kuching where for less than 70 Euros per night I got a huge and very comfortable room , as well as pool and spa. Believe me, after a day in the hot and humid jungle , you will appreciate its fresh 10 mts pool !