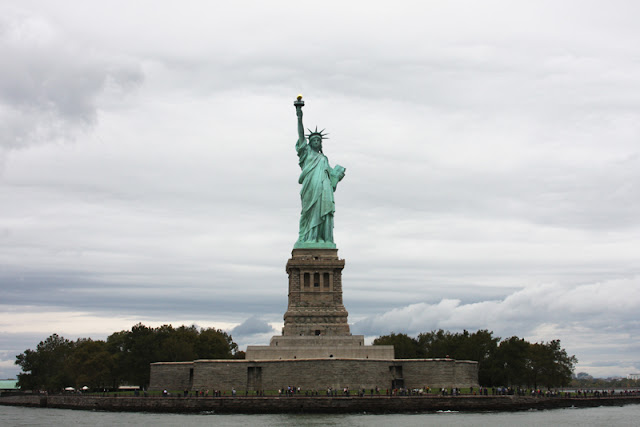 Speaking of New York is no easy task due to the many possibilities the Big Apple offers . Visiting NY it is always exiting , especially the first time: everyone has already been here before and knows the unmistakable Manhattan skyline and the crowded streets full of people and yellow taxis: images seen thousands times in magazines, movies and TV shows .
New York is vital , exciting, glamorous… adjectives abound for this metropolis symbol of the American dream .
But it can be intimate too , and even moving . That’s what I experienced visiting Liberty and Ellis Island, two islands not far from lower Manhattan.
These islands are the perfect destination for a day trip away from the hustle and bustle of the city and a chance to get in touch with America’s history.
Ferries to the islands depart from the pier in Battery Park at walking distance from Wall Street, the financial 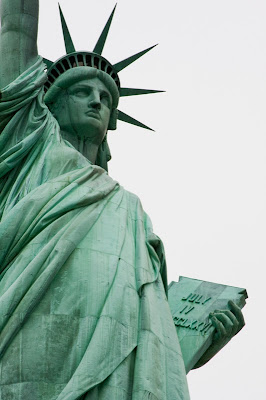 heart of the city. The ferry ride is a journey itself providing spectacular views of Manhattan skyline : from here you get a clear perception of the density of skyscrapers crammed into a few square meters, which seem to sink into the the sea any moments , as if all that steel and glass were too heavy for the thin strip of land on which they lay .

I admit that I came to Liberty Island rather biased , convinced that its famous tenant would disappoint me. But the Statue of Liberty, though not huge, enchanted with its perfect and harmonious face and a sharp look that conveys pride and sagacity .
In the intention of its designer , Eiffel , the Statue had to represent American independence and I think the goal has been achieved because its serious and fair expression reveals the soul of a nation based on dreams and courage.
But the real gem of the day is Ellis Island  that from 1894 to 1954 was used as a sorting station for immigrants .
The original building , masterfully restored, has been turned into  the Museum of Immigration.  The huge Registry Room , with vaulted ceiling, where hope and despair often intertwined, has been left blank , apart from some counters where the inspectors used to seat. Alongside a series of rooms with interesting photographs and text explain the process that the immigrants unterwnet for the first inspection : the rooms covered with white tiles remind me more of a prison rather than the prelude to a new life and I wonder what an immense anxiety all those people must have felt  while doctors decided their destiny .
I wander silently along the halls so as not to disturb the memory of all those who passed here, behind them the farewell to their country, in front of them the hope of a new beginning.
When I get the great Hall of Registration, the emotion skyrockets : millions of Americans can trace their family origins to a man , a woman or a child who passed through this room ; migrants entered the room through the ” stairs of Separation ” , which marked the dividing point for many families and acquaintances to various destinations. I try to figure them in my mind , men tired from the long journey waiting patiently for their turn , women holding hands with theis babies, in their eyes the fear of seeing all hopes of a better life for their family break into pieces. I try to imagine the anxiety they must have felt and the relief when immigration officials gave their permit. 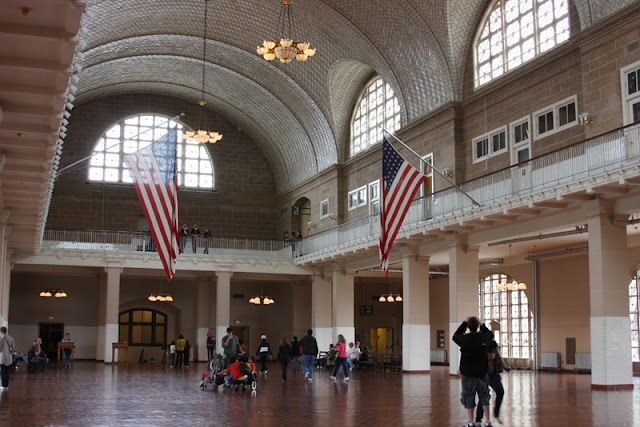 Other rooms illustrate the stories of these people : photographs, texts, small household items , items used along the sea journey and even recordings of original voices . Stories of dreams, hopes , losses, separations and encounters, lives that pass before my eyes, a mosaic of small moments that forged a country.
On the first floor there is an exhibition “The people of America ,” which tells four centuries of American immigration , offering a portrait of the migrants : who they were, where they came from , why they emigrated. Here there are also computers to access the huge migrants file and look for the names of friends and relatives who emigrated, to track down a tangible sign of their being here.
The sorting migrant station  was designed to accommodate 500,000 immigrants per year , but in the early part of the century the number was more than double, a multitude of people that crossed these rooms, bringing with them their roots , their memories , their traditions  mixed with dreams and hopes for a new life.
Here America has its own roots , and it here the Old Continent has established new foundations , delivering part of his people to a new story.