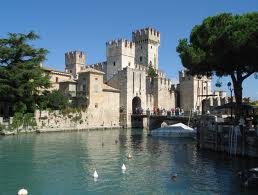 One of the most popular tourist destination, Sirmione is called the pearl of Garda Lake , a jewel nestled on a peninsula reaching out to the lake.
The old town has an extraordinary artistic heritage fruit of centuries of history. Once an important Roman site , it then became part of the Lombard empire, then Veronese and  was then annexed to the Venetian Republic.
This succession of eras and cultures has left an indelible mark on the geography and architecture of the city, and it is this mixture of styles that makes the place so special.
The entrance to the town is marked by the massive fortress of the Scaliger Castle , dating back to the thirteenth century and surrounded by the lake’s blue water.

The three towers and the male , 47 meters high , embellished with battlements dovetail , create a strong impact and the impression that you have is to enter in a medieval village .

Near the castle , along a narrow cobbled street ,St. Anne’s Church , dedicated to the mother of the Virgin Mary , is a small building dating back to the fifteenth century: inside there are votive frescoes of the sixteenth century and a painting on stone depicting the Madonna . It is worth stopping here to admire the simple and clean facade of this lovely church.
In the inside the town is a pleasant maze of narrow streets bursting with shops displaying colourful pottery , scented soaps , paintings, jewellery, embroidered tablecloths and the typical products of Garda , first of all the oil produced from the many olive trees that grow on the slopes and the hills surrounding the lake.
Walking along the main street you get to the Terme di Sirmione : as soon as you cross the threshold  a strong smell of sulfur saturates the air. Sirmione’s water is in fact rich in this element that makes it particularly healthy for the skin and lungs, a treat to which it is hard to say no, especially admiring the beautiful spa park on the outside garden with a spectacular view of the lake .
Leaving the Terme behind, the main road continues uphill through a beautiful park of tall maples and pines until you come to a spectacular rooftop terrace from which you can enjoy a 180 ° view of the lake and coastal countries. 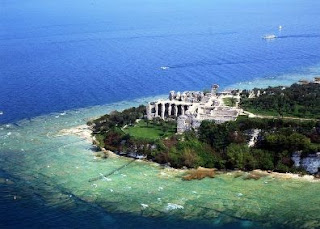 On the tip of the island the Grotte di Catullo are a vast archaeological area that extends on the place where , in Roman times, there was an immense patrician villa . According to the tradition , this was the birthplace of the famous Latin poet Gaius Valerius Catullus. During  the last centuries of the empire,the villa was abandoned  and the vegetation soon covered it entirely . The cavity formed by the half-ruined buildings  determined the name by which the place is still known. The archaeological site is open to visitors and is a place of great charm with a stunning landscape , jutting into the lake to embrace a vast stretch of coastline.
For those who do not want to get up here on foot, there is a comfortable electric train that goes back and forth from the Therme to the panoramic square for only € 1 per ride.
On the way back you can stop at the beach, a pleasant place to have a coffee or lunch admiring the view of the lake or sunbathe on the rocks.