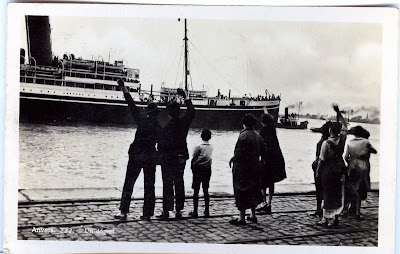 Always on the move. It’s the first sentence I read on the boards introducing to the Red Star Line Museum, opened last September in Antwerp and dedicated to all those migrants who set sail from the city port to a new life .

People have always felt the need to move , to look for new places to live : an instinct that has sealed the fate of all mankind and wrote the story of generations.
The multitude of people that between the late XVIII century and early decades of the XIX came to Antwerp to leave Europe was moved by despair  coming from hunger , hard times and a stagnant agricultural economy that forced many  people to try their fortune elsewhere . I try to imagine the anguish of fathers and mothers forced to take their family across an immense ocean to an unknown world: the last hope before surrendering to a fate of hunger.

The journey these people had to face  began even before setting sail , leaving from Germany , Eastern Europe and Russia to arrive in Antwerp, with the money for the ticket of the crossing in third class .

These are the stories the museum tells , with great humanity and sensitivity , focusing on people, on their hopes and their dreams . A story told from the point of view of the most humble protagonists , a narration that tries to convey all the anguish but also the dignity and strength of those people. 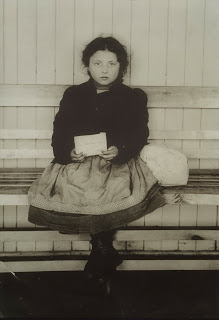 The exhibition is housed within the historic warehouses of the Red Star Line , the shipping company that owned the ships that took this multitude of people on a journey across the ocean to Canada and the U.S. . The stores , which have remained unused for many years after the war marked the abrupt ending of migration, are an important heritage for the city , a symbol of that bridge to America that Antwerp represented for many years.

The aim of the museum is also requalifying these sotres as long as the port , making them modern multifunctional centres that house, together with the museum , temporary exhibitions and become melting pots for citizens and tourists.
In the large central hall I meet Luc Verheyen , the project manager, who tells me the long years passed collecting information on migrants and their stories, the hard times finding information on people and families , but also the joy when a story was finally tracked down.
Symbol of this research is the iconic image of a young girl sitting on a bench holding a Red Star Line ticket in her hands .
Luc tells how they long sought to trace the identity of the young girl spreading her photo everywhere: she’s supposed to be Kattyna Szysz , but there are no reliable data about her identity.
I look at her serious face that seems to get out of the photograph, her eyes conveying the great sense of uncertainty  in front of the journey into the unknown that she was about to undertake.
The exhibition faithfully reconstructs the steps that migrants had to face along the journey to a new life overseas. Each adventure began in a travel agency in their hometown , where a series of leaflets advertised America as the new Promised Land. Red Star Line’s posters are true works of art conveying the atmosphere of the times with the same power of modern images , even though relying only on drawings. 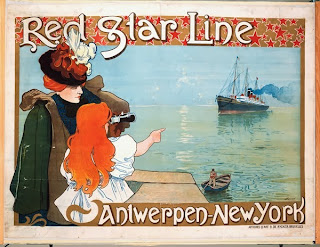 The route continues in one of the wooden train coaches in which migrants undertook the long journey to Antwerp, where they then stayed in filthy hotels waiting for their boarding pass .
It was just inside the premises of the Red Star Line where the most difficult steps began , with the first medical examinations that had to decree the qualification of passengers to travel. The check-ups were scrupulous because the other side of the Atlantic U.S. authorities rejected individuals who were not perfectly healthy , to prevent the spread of epidemics.
The exhibition continues in the changing rooms and showers where migrants, divided between women and men, passed : some original photos of the period are located in exactly the same spot where they were taken, creating a sort of thread between past and present  and an emotional connection with the migrants.
An entire section of the museum is dedicated to the meticulous reconstruction of the stories of six migrants , chosen to represent the two millions who passed through these premises .
Here I meet Ita , who in 1922 at the age of nine travelled to Ellis Island with her mother and three brothers to join her father. Arrived at destination , she was rejected because she had glaucoma , an eye infection which was rather common at that time.
She was thus forced to leave her family in America and get back to Antwerp where she remained one year, where she was taken care by as association of volunteers. The story repeated a second time when Ita was again rejected and forced to return to Europe. Reunification with the family occurred only five years later, in 1927 : I try to figure out the despair of her mother having to leave a little girl behind and the terror of Ita , alone with an ocean to separate her from her family.
I look at all those boards crammed with photos, handwritten letters and video interviews to the descendants of migrants and I understand how the arrival to America was not the end but the beginning of an odyssey that often ended yet before beginning, with a red stamp on the documents ” denied”. But even for those admitted , the arrival in the United States marked the beginning of a difficult journey in search of a job and a house, and a fortune that sometimes did not come, forcing many to return to Europe even poorer than before .
The exhibition continues in a room hosting a scale model of a ship , showing the beauty of these true engineering jewels. It is easy to understand how the crossing for 1st class passengers was much more comfortable than those of the third class , crammed into small cabins in the lower decks . Wealthy passengers could instead enjoy luxury cabins , dining rooms gleaming with porcelain and silver and magnificent bridges to walk outdoors.

The last part of the exhibition reconstructs the arrival at Ellis Island , the largest hub of all times where more than 12 million passengers passed through . It’s easy to imagine the anguish of migrants , exhausted by the trip and fearful of being rejected at the health checks. Ellis Island was by far the biggest obstacle of the entire journey , the rock against which many would see shattered all hopes of starting a new life .
In the last section the museum becomes heritage of the whole community , not just the city but whole Europe , inviting visitors to tell and share family stories of migration, searching the museum’s archives looking for names and traces of their passage here.
A collective story that affects everyone : Antwerp first and foremost , a community made ​​up of over one hundred nationalities , a symbol of multiculturalism and a crossroad since the Middle Ages; Europe , which saw many of its citizens exhausted from a life of misery and despair leaving everything behind to chase the unknown; the United States that on those hopes and despair laid the foundations of their modern history , ensuring to many people a new and prosperous life. Past history repeating in the new migrations today, again caused by an economic crisis that drives many , young and old , to move elsewhere .

Lives on the move, now as then. Migration is a timeless story.