When I think of Provence lavender fields come to my mind, huge spots of purple mixed with grass green.
Provence has a special light, warm and welcoming, and it was perhaps this light that inspired many impressionist painters who produced here their most famous paintings. From Cezanne to Van Gogh’s, many talents were bewitched by the magic of this land.
Follow me in a tour on the footsteps of the great master painters to revisit the same places that inspired them and that became subjects of their immortal masterpieces.
Our itinerary begins in Aix-en-Provence,  the birthplace of Paul Cezanne and site of a prestigious university; Aix is a city with an important cultural and artistic heritage whose heart is the Vieil Aix , the Old Town, crossed by the Cours Mirabeau , full of cafes and elegant buildings of the seventeenth and eighteenth century; the city has dedicated to  its most famous citizen the Circuit Cézanne , a well marked route which starting from the Tourist Office goes through the neighborhoods and the places where the painter lived, arriving at his studio at No. 9 of Av Paul Cézanne, where he produced his works and where everything has remained as he left it.
Aix is also famous for the production of almonds, used not only for cosmetic products but also to  prepare the calissons , typical sweets made ​​of almond paste coated with icing. 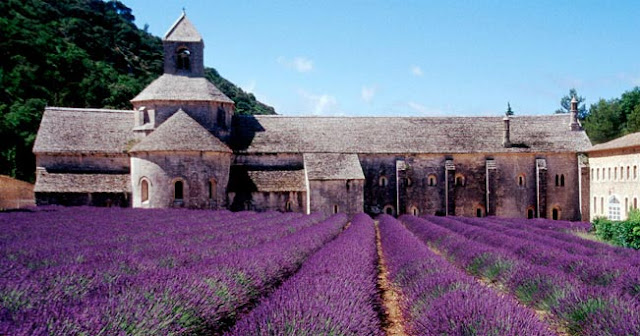 Continuing in our artistic itinerary we arrive at Arles, not without first making a few detours to enjoy other Provence’s jewels, as  Gordes , considered  one of the most beautiful villages of France; perched on a hill, the village is famous for its square where some scenes of A Good Year with Russell Crowe were shot; an excellent time to visit the village is on Tuesday when the local market is held, full of stalls with food, clothing, craft items and much more. Climbing up  the streets you get to the castle that hosts a museum.
Just 5 km north of Gordes a winding road leads to Cistercian Abbey of Senanque, dating back to 1148: one of the greatest examples of monastic architecture, this place is a corner of peace and quiet away from it all.
Continuing north we reach Chateauneuf du Pape , which is particularly attractive in autumn during the harvest period since the place is famous worldwide for its renowned wine production; in the city there are many wineries that offer free tastings.
Following the course of the Rhone we arrive at Avignon , one of the most beautiful historic cities of Provence, famous for being the papal seat from 1309 to 1377; not to be missed is a visit to the opulent Palais des Papes , a UNESCO Heritage which includes two buildings, the Palazzo Vecchio and the Palazzo Nuovo. The Tourist Office offers 4 walking routes to explore the hidden treasures of the city.
Last stop before arriving in Arles is Saint Remy de Provence , birthplace of Michel de Notre Dame, aka Nostradamus, and home to the most famous maitre chocolatiers. A wonderful town to be discovered at slow pace walking through the narrow streets crowded with shops or stopping for a coffee in one of the many lively squares. Here there is also the psychiatric hospital where Van Gogh painted over 150 paintings: today the place hosts a museum which traces the human and artistic path of the painter. And finally Arles , universally famous because Van Gogh moved here in 1888 and in this period he produced some of his most famous masterpieces, as The Alyscamps and Starry Night Over the Rhone. Even though there are no paintings of Van Gogh left in Arles, the city celebrates his most famous citizen with a dedicated route, the Circuit Van Gogh , well-marked by license plates which serves to identify the precise points where the master posed his easel to paint the landscapes and cities of Provence.

Another interesting historical circuit is the Roman Arles that includes the Roman amphitheatre Les Arenes, the ancient theatre and Alycamps, a long avenue where many Roman tombs are aligned.
With so many historic towns, vast vineyards and traces of the great painters, Provence is the perfect destination for a charming vacation!