Considered one of the most beautiful counties in England, this thin strip of land stretching out to the Atlantic coast is the largest and most picturesque part of the island, with breathtaking views of rugged cliffs, green headlands, bays and charming small villages .
Cornwall, as the rest of England, is a notoriously quite expensive destination, due to the always less favourable change, but with some tricks a holiday here can cost less than expexted.

To get here you can use one of the many flights to London offered by numerous low-cost airlines (Easyjet, Ryanair etc.) which, when purchased right in advance, are quite convenient. From there you can reach Pezance by train, the southernmost station , and from here use secondary lines or buses to move from one coastal town to the other, or simply rent a car to explore the region and reach the most remote places.
St Ives
Nestled between high cliffs above a beautiful bay, St Ives is one of the most beautiful towns of the region, known for its numerous art galleries that make it a lively artistic and cultural center. The center is a maze of narrow streets full of nice bistros, restaurants, cafes and art shops. Crowded in summer, the traffic of the high season ruins the atmosphere but you can stay in the nearby Carbis Bay, a spectacular bay with a beautiful beach. Among the many B & B who are here you can try The Borthalan, offering nice rooms with sea view at a right price. Carbis Bay is connected to St Ives via a convenient and cheap local train which arrives in town in a few minutes through a spectacular coastal railway line.
Because of its location, Carbis Bay is a great base from which to explore Corwall with day trips, and then enjoy the relaxed atmosphere of St Ives in the evening.
Gwithian e Godrevy
On the opposite side of the bay, facing St. Ives, Gwithian and Godrevy offer over 4 km of magnificent windswept beaches frequented by surfers and kite surfers. For the lovers of classic English literature, off Godrevy’s coast there’s the lighthouse stands that inspired the famous novel by Virginia Woolf’s To the Lighthouse.
Newquay
Facing the northern coast among stunning cliffs and white sandy beaches, Newquay is loved  by young people who invade it in the summer and turn it into a sort of Rimini of Cornwall. It ‘a very animated and lively place, full of pubs and clubs and with endless possibilities for cheap accommodation, from hostels for backpackers to the many B & B. The city has a beautiful and lively beach and is considered the surfing capital of the county, with streets always crowded with boys with their surfboards heading to the beach to ride the ocean’s waves.
The Lizard 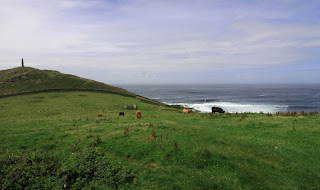 The Lizard Peninsula provides the most stunning and romantic views of the county, with rugged coastline, granite cliffs and green meadow. You can get by car (or by public bus service from the nearby Helston) to Lizard, a tiny village with wooden cottage that has the charme typical of all places at the end of the world, and bars more similar to American diners than the typical English coffee shops. From the main square depart many coastal that cross the moor and lead to the Lizard Lighthouse (now fully automated) and Lizard Point, the southernmost point burst by the wind. From Lizard you can take the path in about 2 km leads to Kynance Cove, a beautiful beach surrounded by cliffs and headlands covered with heather.
Zennor
One the most beautiful stretches of the South West Coast Path is certainly the one that in about 10 km connects St Ives to Zennor, a quaint village where DH Lawrence used to stay. Here is you can stop at the Tinner’s Arm pub, a traditional inn with wooden ceiling and slate roof where the writer used to stay; those walking the round trip from St Ives can stay overnight at the Old Chapel Backpackers Hostel, located right along the coastal path at Zennor, a well maintained hostel with double rooms or dorms.
Those reaching the village by car wil try the thrill of the typical Cornish countryside streets, narrow and lined with  walls, a bucolic landscape but quite a little relaxing experience for those who have to drive: better to rent a small car !
Land’s End 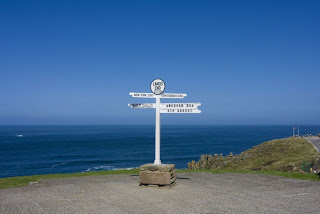 Land’s End is the most extreme of the region where the cliffs surrender to the turbulent waters of the Atlantic. Definitely one of the most spectacular places in Cornwall, the magical atmosphere is unfortunately ruined by the theme park (a kind of 3d cinema) that was built right next to the visitor center, on the promontory overlooking the extreme point of the coast.
You can still enjoy the beauty of the place and enjoy the surrounding landscape walking along the coastal paths that start from the visitor center.

Land’s End is well connected to St Ives by public buses (1 hour and a half).

Useful Information:
Public Transport: site: http://www.cornwallpublictransport.info collects information and timetables of all public transport (trains, buses, ferries) that connect cities and major tourist destinations of the region.
Accommodations: The best value for money is offered by numerous B & B; they can be booked independently or at http://www.cornwallbedbreakfasts.co.uk/ http://www.visitcornwall.com/accommodation/bb-guest-houses

Meals: in every town and village there are pub who serve tasty and cheap meals.